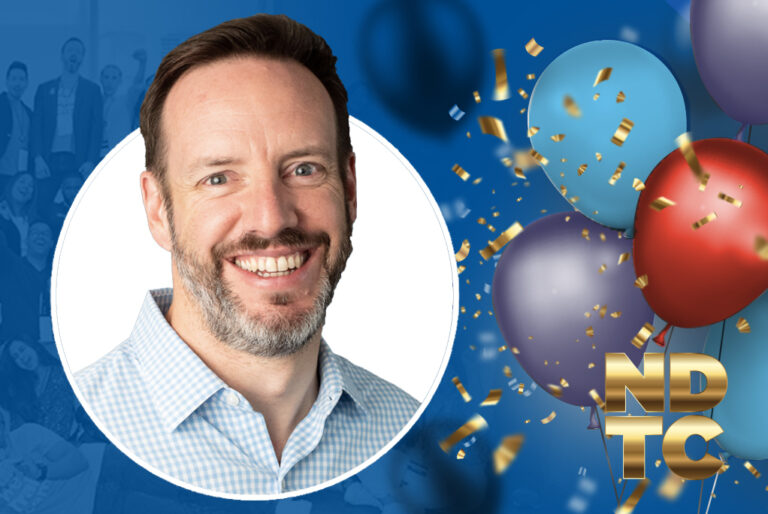 We’re celebrating NDTC’s sixth trip around the sun by reflecting on how far we’ve come as an organization. There’s no better way to put our accomplishments into perspective than a conversation with the man, myth and legend, our own Chief Dad Joke Officer, Founder, and CEO Kelly Dietrich! Last week, we sat down with Kelly to ask him about NDTC’s past, present, and future.

Recalling NDTC’s early days, Kelly was nostalgic about filming our first 10 training modules. With a shoestring production budget and minimal manpower, creating those first lessons proved to be an arduous task. Thankfully, with enough commitment, dedication, and assistance from AL Media, those initial pre-recorded trainings set the stage for our future as an organization.

Zeke was the only employee, and we had a few interns who I had convinced to come along based solely on free lunches. We would shoot at a sub-leased studio on the north side of Chicago that was probably… 30 feet by 20 feet?  I mean, it was pretty small. We had a window air conditioning unit, and it was the middle of summer, but we couldn’t turn the air conditioning unit on because it was too loud for recording.

Then every eight minutes, the train would go by because we were right next to the L tracks. So you had an intern holding a cue card with me in front of the camera from the waist up. I’m in shorts and no shoes because it’s so hot. And I’m trying not to sweat everywhere through all of this. And you have to do your takes in eight minutes to get it done and get it right.

NDTC’s formative years were spent under Trump’s chaotic administration. Our country underwent a massive change in the political status quo. We saw changes that impacted the climate of both our national and local elections. We were curious to hear Kelly’s thoughts on this changing political landscape, and the biggest impact the past few years had on local elections in particular.

It’s not an either-or, right? It’s both sides. You hit the nail on the head with the Trump years, which we may or may not be out of, but we are still certainly in the middle of feeling the repercussions of his disastrous administration, and more importantly, his disastrous entry into politics. He normalized behavior that wasn’t normal before, that wasn’t acceptable before….

As an organization that revolves around elections, we couldn’t miss the opportunity to ask Kelly about urgently-needed election reform. There are various efforts underway to strengthen voting rights throughout the country. Among the many examples are attempts to repeal Citizens United, and enshrine much-needed voting rights into federal law. With so many battles being fought on so many fronts, Kelly shed some light on which reform he believed to be of the highest importance:

Despite our many accomplishments as an organization, our work is far from finished. In fact, we’re only just beginning. Anticipating our 10th birthday, Kelly had these plans for the next four years of NDTC:

Let’s talk programmatically, I want our curriculum and our offerings as customizable as possible. When you come in, we serve up a user experience that is completely personalized to your needs.

For instance, [our curriculum] is populated with Illinois election law, it’s populated with best recommendations for running for Coroner, whatever, and you tell us what your budget is. So we can say, “alright, well with that type of budget, we know you’ll be hiring staff…”. It pre-populates with all that kind of data. That’s the ideal vision for the program.

Growth As A Leader

Bringing it back to Kelly personally, we wanted to investigate how managing an organization as ambitious and large as NDTC changes someone. Considering the many demands of time, talent, and resources necessary to captain the ship, we asked Kelly how he’s grown as a leader over the past six years.

It has been a learning experience for me to grow beyond just me doing everything and to delegate, trust, and guide others.

When you say something, it’s not taken as just like, “oh, that’s an excellent suggestion,” anymore, right? It has the ability to completely color the conversation.  It persuades people, or pushes them in a certain direction. It’s different than having just a freewheel brainstorming session where all the ideas are on the wall.

I am naturally a very talkative, outgoing, opinionated person. So I’m learning to hold back and just let conversations run their course. We have incredibly talented, brilliant people on this team who come up with some amazing stuff. I don’t want to get in the way of any of that going forward.

To close out our conversation, we reflected on the power that music has in motivating candidates on a tough campaign trail. During the backbreaking journey of running for office, every candidate needs a little pep in their step, a rhythm to keep them going, or simply a song to inspire them. That’s why we prepared this high-energy, motivational set of songs curated by our team. Use the tracks below to power through your campaign’s GOTV phase, and crush your voter turnout goals!