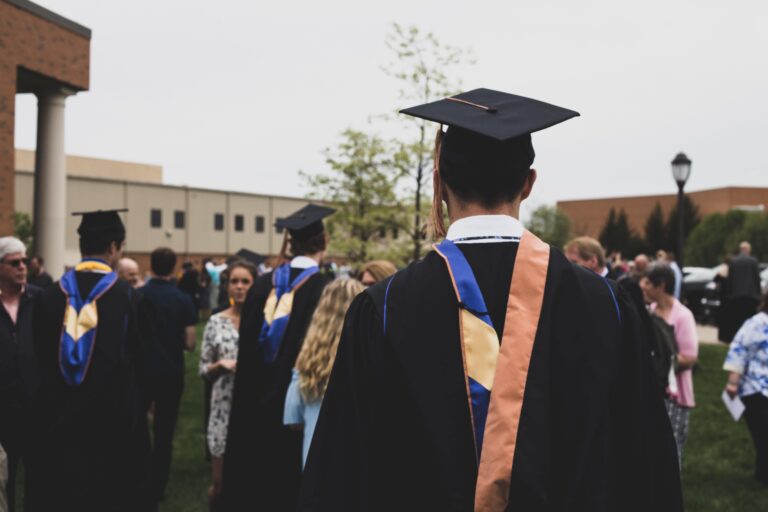 At NDTC, we’re always conscious of barriers that prevent Americans from running for local office. One of those barriers is financial debt, especially student loan debt.

Last week, the Biden administration officially extended the pause on Federal Student loan repayment until August 31. Many of our nation’s graduates feel pleased with the deferrals thus far, but these extensions do not confront the larger problem. Our nation’s total student loan debt is enormous. It puts a huge burden on America’s working and middle-class families. It also limits the opportunities available to 46 million Americans. It’s time to acknowledge the direct, tangible benefits debt cancellation would have on local elections.

It’s clear more people will be financially secure enough to run for office if not for the crushing financial weight of student debt on their shoulders. Canceling student debt encourages millions more qualified, educated candidates to run for office. Leveling the financial playing field between aspiring candidates gives underprivileged folks a better shot at upsetting established and potential officeholders from wealthy backgrounds. Today, we’re going to take a brief look at the disproportionate impact of student debt in America and examine the likelihood of loan forgiveness in the near future.

Both our national congress and local offices suffer from gender parity. Simply put, we need more women to run for office. Women hold nearly 2/3rds of America’s outstanding student loan debt. Failing to provide adequate student loan relief means failing millions of women who choose not to run because of the financial burden.

Student debt also has a disproportionate impact along racial lines as well. 40% of Black Americans who come out of grad school have outstanding debt. That compares to only 22% of white students.

What these figures illustrate is the role of financial privilege in politics. Debt is a huge decider in who is, and isn’t able to run. Canceling the debt would, in effect, level the playing field between aspiring candidates, giving underprivileged folks a better shot at upsetting established local candidates from wealthy backgrounds.

One of our main goals at NDTC is to create a deep bench of qualified candidates for every office. Loan forgiveness is perhaps one of the best ways to deepen that bench overnight with the stroke of a pen.

Pressure From The Top

Luckily, many Democrats in congress speak up with support for widespread loan forgiveness. Senate Majority Chuck Schumer in particular, along with AOC, has called for a minimum of $50k in forgiveness for all borrowers. Previously, Biden pledged to forgive a minimum of $10,000 of debt per borrower. Neither has yet happened. 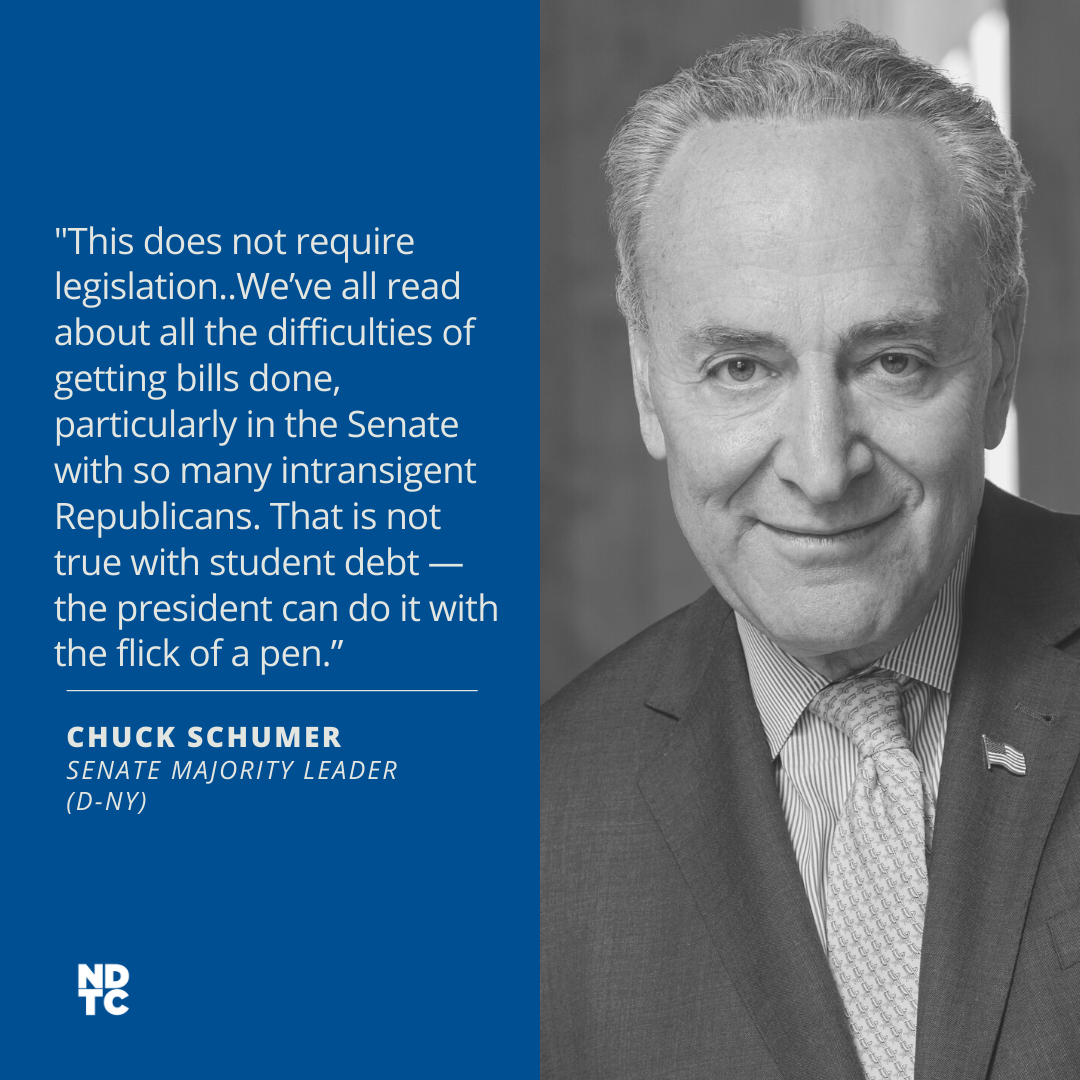 $50,000 in loan forgiveness transforms the careers of our nation’s future leaders. Over half of college graduates with more than $55,000 of debt take a job outside of their field in order to repay their student loans. This includes graduates with degrees in public policy, management, and political science, among others. A job in politics is not necessarily lucrative, especially entry-level. The median entry-level salary of a first-year political science grad falls below the median for college grads as a whole.

In other words, folks who enter the political arena do so to prioritize change in their community, not personal profit. We already know that. However, loan repayment necessitates that recent grads make enough to pay back their often-crippling levels of debt. This means that the people who are most well-equipped to lead our nation in the future are financially incentivized toward careers outside of politics. Debt forgiveness fixes this issue to a degree. What it won’t do, as many detractors claim, is promote laziness among the Millennial and Gen Z workforce.

Median household income has been on the rise through the past decade, but it has failed to keep pace with inflation. The average cost of any degree has also been sharply on the rise. Tuition costs now outpace inflation 2-1. Our nation’s young professionals get these degrees because they are often necessary to make an entry into the political workforce.

While a degree has remained a necessity for most who work in politics, the increased cost has resulted in a 157% increase in the total amount of student loans. Forgiving these loans won’t solve the larger problem of higher education. It will, however, ensure that qualified campaign staffers and candidates from lower and middle-income families can afford to work in politics.

Running for office already requires massive commitment. Candidates are forced to spend less time with their family and work 25 hours a day or more on the campaign trail. The last thing we need our public servants worrying about whether or not they can pay their loans at the end of the election cycle.

Candidates like Stacy Abrams have repeatedly come under attack for their personal debts. Abrams is one of the 46 million Americans who has debt as a result of her education. She felt the need to defend herself on the subject of her personal finances, even though it was nobody’s business but her own. A common falsehood is the conflation of financial debt with a sort of moral failing. These attitudes are just as prevalent, if not moreso, in local elections as they were in the statewide race in Georgia. Beliefs like that are pervasive and only benefit those who already hold power as a result of generational wealth.

In reality, 46 million is roughly a sixth of our nation’s entire population. We all know someone who has student loans, especially since they’ve become a necessity for nearly all upwardly-mobile people not born from wealth. A candidate for office with student loan debt speaks with firsthand experience of this massive burden hindering many of their constituents. Rather than disqualify them from office, holding student debt makes a candidate more representative compared to their ultra-wealthy opposition. Our political arena already sees a lack of representation from working-class folks. These attitudes further disadvantage the types of candidates who are already, as a result of the wealth gap, underdogs.

The problem of an increasingly costly higher education won’t be solved by debt forgiveness. It would, however, empower a cohort of extremely qualified and historically disadvantaged people to run for office and staff campaigns. Countless Americans put off running for office, fearing the same unfair attacks that were levied against Abrams and others. It’s unclear what further actions will come regarding debt cancellation. We’ve seen forgiveness proposals from Democrats range from $50k, $10k, to nearly all of it. What is clear, however, is the impact this action would have on the strength of our democracy.

Are you a young professional ready to unseat a long-term office holder? Getting your campaign off the ground can seem intimidating at first, especially when your opponents may have decades of experience. Learn more about the early stages of campaigning and build a detailed plan to succeed in your district by following our link below.