Do’s and Don’ts for GOTV 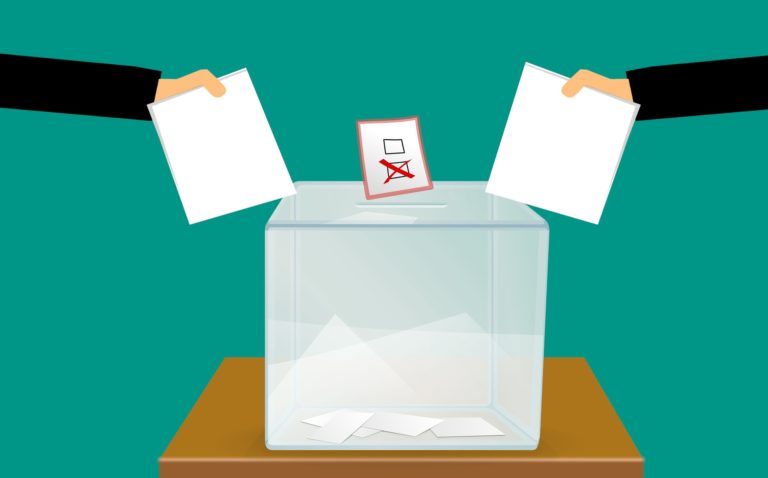 Getting Out the Vote (GOTV) is potentially the single most important aspect of a campaign. If you want to win on election day, you need more votes than your opponent. That doesn’t happen if you don’t encourage your supporters to vote.

Furthermore, because voting rights have become a hot political issue in the post-pandemic world, the logistics around voting can change from year-to-year. As a result, it’s necessary for campaigns to remain up-to-date on best practices for mobilizing voters to the polls.

To that end, we’ve put together our list of Do’s and Don’ts for GOTV.

Do Tell Volunteers What the Goal of GOTV is

Your field efforts to this point have been all about persuasion. But with GOTV, campaigns are done identifying new supporters. Instead, they focus on turnout, and making certain identified supporters actually vote.

It’s also important to recognize that politics is not a top priority for many voters. Often, life gets in the way of people remembering to vote. That’s why it’s up to you to harass, cajole, and drag every last base and identified supporter out to the polls.

This means you want to focus on a GOTV universe made up of your base voters or party voters. Remember, these are the voters who have a good record of voting in your party’s primary over several elections. Now in addition to those base voters, it also includes all of the persuasion voters that you’ve identified throughout the course of your campaign up until now.

That said, there’s a caveat to this rule. You may find that even with all the party voters and the persuasion voters you identified that are supporting you, you don’t have enough votes to win. If all of those folks combined are not large enough to get you to your win number, this is not a reason to panic. 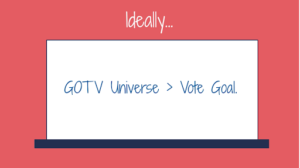 When this is the case, you need to expand your GOTV universe to include other groups. It’s not ideal, but happens all the time. Perhaps you add more persuasion voters that have not been contacted or you add more party voters who have less reliable turnout history.

But, if you’re sending volunteers to persuade a voter during GOTV, make sure that they’re aware of this. They need to understand what their goal is when talking to a voter. It will also be helpful if you mark this down on their walk sheet.

Campaigns would be a lot easier if you could call a voter, leave a voicemail reminding them to vote, and then they’d show up at the poll.

Sadly, this is not the case. A voicemail is likely to go unheard. A single phone call, even if answered, is likely to have little impact on a voter. Realistically, you’ll need to contact a voter at least three times before your message really hits home.

“If people are complaining you’re calling, or talking, or knocking on their doors too much, congratulations. You’re doing it right.” — Kelly Dietrich, NDTC CEO and Founder

If your GOTV phase coincides with early voting, you’ll want to keep contacting a voter until they tell you that they have finally voted. If a voter still hasn’t voted when you contact them, make a note to contact them again later on.

Don’t Leave a Bad Impression of Your Campaign

One of the worst things you can do for your campaign is to leave a bad impression when you’re interacting with voters. Above all else, you want to remain respectful and polite at all times. Smile and say hello. Don’t force voters into in-person interactions. If a voter tells you they don’t want to be bothered, don’t bother them.

During the GOTV stage of your campaign, you might come across voters who have previously said they intend to vote for your candidate, but now they refuse to do so. This is frustrating. You thought you had a vote locked down, but now you don’t. You may even feel like you need to stand there and argue with the voter in an attempt to get them to vote for you.

This actually helps you in the long run. Now you know to not spend your limited resources trying to get this voter to the voting booth.

Leaving a poor impression on a voter can only serve to hurt your campaign. Not only have you made the voter more likely to vote for your opponent, but they may also encourage those around them to do the same.

Do Make Voting As Easy As Possible

In certain circumstances, door-to-door knocking and in-person voting are not the most efficient ways of getting your supporters to the polls. During COVID-19, we all learned the importance of having alternatives to in-person contact that allow voters extra time and flexible alternatives for voting.

When you contact voters during the GOTV stage of your campaign, make sure you provide them with important information that they should know when it comes to voting.

Where do they need to go to vote? What are the options for early voting? Do they need an ID when they vote? These are questions that your campaign needs to be prepared to answer for voters. The easier you can make voting for them, the more likely they are to vote for you.

Additionally, don’t hesitate to use your digital platform to amplify these details in the lead up to Election Day. For example, make sure to regularly inform your supporters about voter registration deadlines, especially if you live in a state without same-day registration.

Do Get Out The Vote

Getting out the vote is a vital part of election day. If you don’t do your part to get voters to the polls, you’ll end up disappointed when the results come in.

By following these do’s and don’ts, you’ll be able to run an effective GOTV strategy during the pandemic.

To learn more about the winning tactics behind an effective GOTV campaign, check out NDTC’s GOTV course. You’ll learn how to identify the voters to contact, and how to make the most of your staff and volunteers during GOTV.