The Fight To Make Election Day A National Holiday

The Fight To Make Election Day A National Holiday 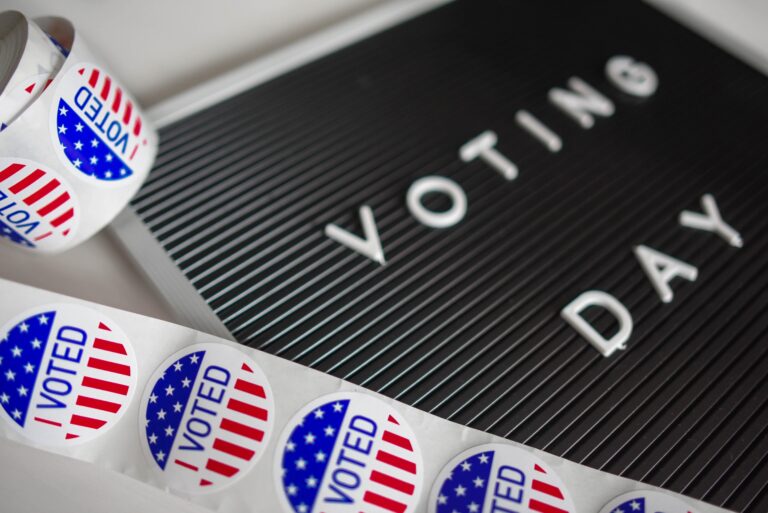 In-person voting can be difficult, especially when coupled with the busy and often chaotic lives of many Americans. Scheduling a time to vote, showing up, and waiting in lines for long hours is not something everyone can do. Work, childcare, and other obligations make polling places inaccessible. There are two clear solutions to this problem, one of which is Early Voting. The second, more promising option, is the establishment of Election Day as a federal holiday.

Today, we’ll take a brief look at the recent history of the latter effort. We’ll assess where we are in the fight for a federal election holiday and how much further we have to go to get it.

Early Voting Is Not Enough

A record number of early voters participated in our last presidential election, but the problem is far from solved. 11 States still don’t allow no-excuse early voting. Any progress on that front requires each of those state legislatures to revise their laws on voting rights. That process could take decades.

A federal holiday is a more promising solution simply because it can be applied nationwide and quickly take effect. We saw this happen last year when the first federally-recognized Juneteenth was celebrated just 2 days after being signed by President Biden.

Studies have shown democracies that vote on a weekend or holiday produce consistently higher voter turnout compared to countries that don’t. This is likely a contributing factor to our poor per-capita voter turnout.

Forcing people to vote exclusively on the arbitrary date of “Tuesday after the first Monday in November” disproportionately affects marginalized groups. Black and Latino voters in particular wait in long lines and face delays in an effort to vote. These inconveniences, especially when faced in the middle of a busy work week, discourage voting.

For many communities, restrictive access to voting rights is nothing new. It’s part of the systemic inequalities Democrats work to dismantle day in and day out. For many, however, voting rights seem to get more constrained every passing day.

A wave of new state-specific restrictive voter laws has popped up in recent months. These laws threaten not only the next midterm elections, but entire generations of Georgians, Floridians, and millions of other state-specific voters disenfranchised by the legislation. Some of these laws have even been deemed unconstitutional, yet many of them will still take effect in one form or another.

A federal voting holiday wouldn’t be a magic bullet to defeat these anti-democratic efforts. It would, however, give people more time to work around the new restrictions on the day of voting.

The existence of a pro-voter holiday could even shine a brighter light on these Anti-Voter laws and help to mobilize the overturning of those laws. 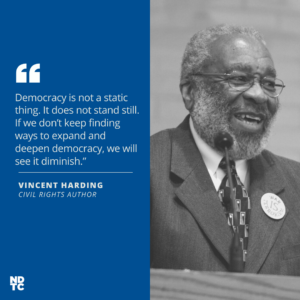 Establishing a federal voting holiday serves as a symbolic victory for our democracy. It also provides tangible relief to millions of eligible voters who struggle to vote every election cycle. The third most commonly-cited reason for registered voters not voting is a busy schedule. The best way to expand government representation among underrepresented groups is to increase their access and ability to vote.

The United States consistently performs poorly on the Global Democracy Index. Last year, global economists rated our nation 26th on the list of healthy democracies. This low ranking is due in part to skepticism expressed by everyday Americans in the integrity of our democratic process. One of the best ways to rebuild trust with voters is to give our day of voting the same reverence we give to Independence Day, Memorial Day, and other pillars of our nation’s history and identity.

This idea is far from new. A Federal election holiday has been proposed in many forms over the past few decades. A renewed push to strengthen the voting rights of every American includes President Biden’s desire to make election day a national holiday, which he has expressed both on the campaign trail and while in office. Last year, Senator Klobuchar sponsored the Freedom to Vote Act,  which failed to pass in the Senate despite the overwhelming support from voters of both parties. 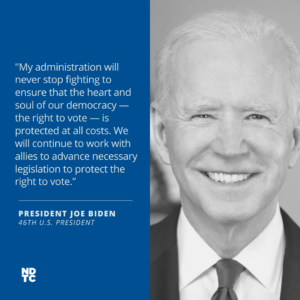 Voters’ Rights groups across the country have begun mobilizing with a federal voting holiday as one of the main objectives. Groups such as Black Voters Matter, Voto Latino, and many others lead the charge to make this a priority for our legislators. And groups such as End Citizens United, work tirelessly to end all forms of voter suppression in our country.

Restrictive voting laws will almost certainly have a negative impact on our upcoming elections. However, there’s still a good chance that a revised bill could pass in the coming months. One of the Democrats’ usual holdouts, Senator Joe Manchin, even expressed his willingness to see Election Day made a national holiday. While the details of any Voter Rights legislation will be hotly contested, it’s likely that Democrats will come together in agreement on the need for a holiday.

How can you help in the meantime? Take advantage of early voting laws and cast your ballot early if you live in a state that allows you to do so. Anything to shorten the lines on election day is a tremendous help for today’s voters.

Want to learn more about the fight to end voter suppression in America? Check out our resources for both defining and combating the systemic repression of voters.