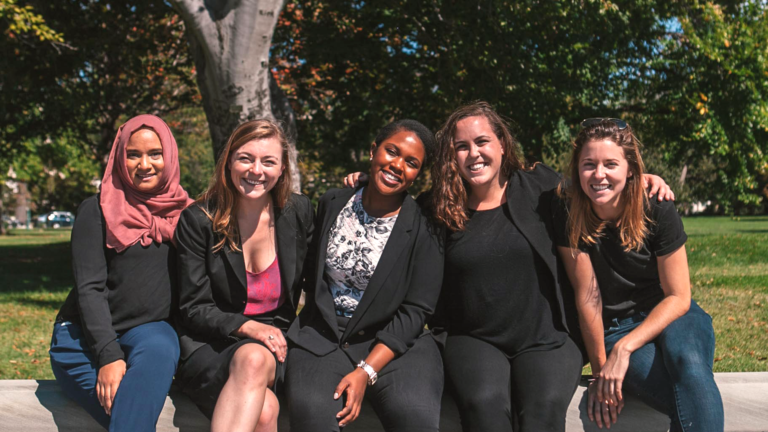 Founded in 2015, Platform, empowers these voices to dream of change and challenge the status quo. When marginalized communities come together, lawmakers and political officials listen, and ideas become reality.

Christi Owiye and Jennifer Mandelblatt, along with the rest of the team at Platform, know this. So, they built a community where young people have agency in shaping their future.

Platform briefs their constituents monthly on policy that affects their community’s personhood. By producing policy packs, folx get a clear rundown of the issues-at-hand with stats, stories, and action items needed to usher in change.

Recently, we caught up with Christi and Jennifer to talk about their nationwide listening tour and the mobilization of young women-identifying, gender non-conforming, non-binary, and femme folx across the country.

Christi Owiye: My name is Christi Owiye. I use she/her/hers pronouns. I am the External Affairs Manager for Platform.

Jennifer Mandelblatt: I’m Jennifer Mandelblatt. I’m one of the co-founders and the Executive Director of Platform. We are a political training and lobbying organization for young women-identifying, non-binary, gender non-conforming, and femme folx. And, we work to ensure our communities’ voices impact the legislative decisions that affect their lives.

Active Listening Across the Country

What motivated you to conduct a nationwide listening tour?

Jennifer Mandelblatt: We are gearing up for the election of our lifetime. We know in every election cycle, every political pundit analyzes, predicts, and shames young voter turnout, without understanding why and asking those questions. So, we want to launch this listening tour to talk to young people across the country, to understand how they are thinking and feeling as we head into November.

What are their whys?

Because, we know we’re not just fighting towards November 3rd, we’re fighting for a democracy 365 days a year that actually serves young people.

What was the most surprising finding you came upon when doing this research?

Christi Owiye: One thing that we were surprised about was just how many young people don’t feel like they really fit into either party. Obviously, they feel so strongly that by no means are they Republicans. But, they don’t feel like the Democratic party quite represents them or their interests.

Jennifer Mandelblatt: One of the things that I’ve found surprising was they craved to learn more about their local elections. There are incredible organizations out there such as Run For Something that are showing people that we need to engage and build power locally.

But, there aren’t enough resources right now. You don’t even teach young people how to vote, much less what the role of our elected officials at the local level are. So, how do we fill in that gap? That’s the big question that we’re looking towards. And there are groups, like Young People For, that help map out how young people fit into this conversation.

What You Can Do For Young Voters

Many of our trainees are those candidates, campaign staff, and local leaders working at the local level. What are the top three things they can do between now and the election to engage young people as volunteers and voters?

Christi Owiye: I think that one of the biggest things that can be done, is to meet young people where they’re at. Obviously, not physically because we’re social distancing right now. But, you definitely want to understand where they’re coming from, and find those touchpoints where things make sense, and build community from there.

Use that community building as an opportunity to build collective power.

Jennifer Mandelblatt: I would say two things. First, make it clear that it’s okay that you don’t have all the answers. It’s okay if you’re not yet registered to vote. There is this assumption that because of the incredible youth movement that has been growing in recent years, there’s this expectation that you know how to get involved. There is this expectation that you are already registered to vote. And, there is this accompanying fear that if you admit that you’re not, you’re going to be cast aside. So, how do we, and how can campaigns make that very clear?

One of our suggestions is to talk about that process. Highlight and celebrate stories about people who are first-time registrants. Don’t say, “You’re late to the party.” Honor the fact that they are here and ready to show up and do the work now in this campaign.

These are all young people who are invested in the well being of their community and fighting for a future that counts them. So, we have to honor that political power and bring them into our circle to say, “The work you’re doing is political. We honor it and want you to be a part of our team as well.”

Are there issues you found that young people rally around more actively?

Christi Owiye: Absolutely! Jen touched on those points: racial justice, reproductive justice, climate change. There are so many more, but those are sort of the top three issues that young people care about, as well as the student loan crisis.

Jennifer Mandelblatt: Groups like Future Coalition have mobilized climate justice and climate change voters, especially young voters. They’ve been taking to the streets and building so much power. So, how can candidates work with groups like this at the national level, and the young people they have mobilized. Translating them into voters is key—connecting on the issues and bringing them in as voters.

Student loan debt is also very critical because it is a barrier to entry to the civic engagement process. Some of the things our young folks on this listening tour talked about is that they want to be politically engaged. They want to help canvass. They want to go to club meetings. But, they’re also full-time students who are working two part-time jobs, if only two. They’re taking care of their families, and showing up for their friends and community.

Being politically engaged, while important and essential for us all to do, is in many ways a privilege. And, so when we tackle the issues of access, we’re liberating students from the struggles of student loan debt. We do this, so you can be part of the conversations that impact you.

Do you think this election is helping them engage more, or are they getting turned off from feeling overwhelmed?

Christi Owiye: It’s a combination of people saying, “Yeah, I’m fired up. I wanna be involved, and do things.” And other folks saying, “Woah, too much. I’m stepping back and stepping away.”

Jennifer Mandelblatt: So much of what Platform talks about now is how we are fighting back against the pain of what has transpired over the last four years. But, not necessarily how we are investing in building forward.

We have to make sure we know our young people, who might not otherwise be engaged in this election cycle, will show up at the polls because they know how much is at stake.

Understand that whatever happens on November 3rd, we have to earn their engagement every single day afterward.

People are tired of watching this game of politics play out when their lives and their rights are on the line. Because this isn’t politics to them. This is their life. I don’t think the partisanship is keeping people home necessarily on election day, at least for the folks we talk to. But, it’s taking away from their respect and desire to show up in the two-party system.

That is such a good point. Our work is not done on November 3rd. It’s just starting. Is there any last thing you want to make sure our trainees, candidates, local leaders and campaign staff are left with, especially as they’re going into this last phase?

Christi Owiye: Young people have power. Young people are aware of that power. They want to harness it for candidates, movements, and work that feels appropriate and represents their needs.

When young people show up to the poles, they are not coming as individuals. They are voting with their families, education, and futures in mind.

A lot of people are expressing, “I was born here and I’m documented, but someone close to me isn’t documented. So when I show up to vote, I’m voting for communities that matter to me.”

We give a heartfelt thank you to Platform. Their work is detrimental in ensuring our democracies are upheld and inclusion is valued in the political process. Want to dive deeper? If you’re as pumped as we are, feel free to check out our other blog post on Communicating with Young and First Time Voters.