How to Choose the Right Paid Media For Your Campaign - NDTC

How to Choose the Right Paid Media For Your Campaign 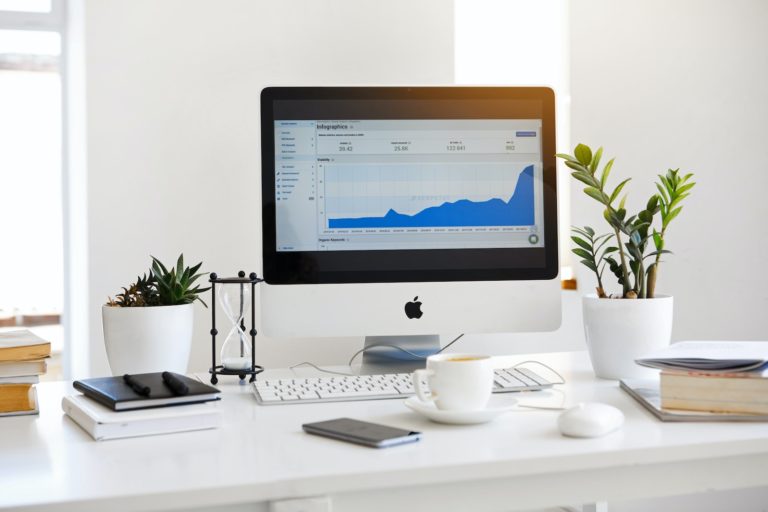 Over the course of a political campaign, one of the biggest factors in winning is name recognition. If people aren’t familiar with you and your political positions, how can they be mobilized to vote for you? Campaigns must, therefore, fight for voters’ limited attention. Garnering attention can be difficult, especially in a tight race. Paid media is a valuable tool for generating name recognition and increasing a candidate’s profile.

What is Paid Media?

When a campaign pays to advertise to a predetermined audience, that is paid media. Paying for media guarantees the campaign’s message will be broadcast for a specific amount of time. This distinguishes it from earned media, which is free but does not guarantee distribution.

“Paid media is a very effective way to reach new voters outside your immediate network and cut through some noise and digital ‘clutter.’” — NDTC Marketing Director, Laura Petrolino

Here’s how to effectively use paid media for your political campaign:

Typically, the best media opportunities enable campaigns to buy ads multiple times over the course of several weeks or months.

How can a campaign determine the right amount of paid media to purchase? The answer varies for each campaign. Sure, some potential voters might get annoyed by overplayed commercials. However, general wisdom states that viewers must see an advertisement seven times for it to stick. So buying a sizable amount of paid media is crucial to getting the exposure needed to win.

Connect With Voters Through Paid Media

It’s inevitable that people will see a campaign’s paid media many times. So it’s essential to make paid media interesting and exciting for voters.

“If voters see your ads as important, interesting, fun, or new, they’ll be less likely to be annoyed and more likely to root for you.” — NDTC Trainer Morgan Harris

The best advertising connects with voters and provides useful information. It gets the audience to internalize a campaign’s message while entertaining them.

The Different Types of Paid Media 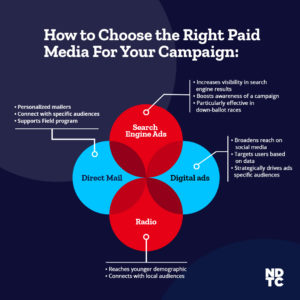 When most people think of paid media, they often associate it with a barrage of television advertisements in the final days of a campaign. However, TV may not be accessible or necessary for your campaign. Luckily, there are still many media options your campaign can use.

One of the most popular forms of campaign advertisement is direct mail. For many, this is the most effective method of paid promotion.

“It may sound old-fashioned and isn’t flashy, but when used in partnership with other methods of getting your story out, direct mail can be an impactful, cost-effective way to reach voters.” — NDTC Trainer Morgan Harris

Direct mail is a great way to connect with specific audiences based on information such as voting history. This information allows campaigns to communicate with voters in a more personalized manner.

For more information on segmenting your audience for direct mail, check out NDTC’s course: “How to Build Your Campaign Communications Strategy on Different Media Platforms.”

A campaign’s paid media strategy should support the field program. For example, the campaign should plan to knock on voter’s doors the day after they receive a mailer. This is how a campaign develops meaningful relationships with supporters.

Another form of paid promotion growing in popularity is digital advertising. Digital strategy usually encompasses paid and free posts. Plan paid content by putting it into a social media content calendar, as well as the Digital plan.

Social media companies provide the option of paying extra to broaden your reach on their platforms. Many platforms also allow targeting of certain users. Facebook ads, in particular, are an effective way to reach out to a more niche audience. For example, campaigns can use Facebook to target users based on interests or occupation. Facebook ad campaigns are also a great option because you’ll be able to run those ads on your Instagram as well.

Use your campaign’s data to strategically drive ads to specific audiences. For example, promote paid media posts to segments of your email list. This will further ensure that your content reaches its intended viewers.

If you do invest in paid social posts, don’t stop focusing on organic growth. Relying solely on traffic from paid posts might lead to unexpectedly low turnout. Build genuine relationships on social platforms to ensure supporters turn out on Election Day.

“If you only focus on paid growth, and you launch your campaign with 3,000 followers and don’t grow that, then you’re just going to flatline.” — NDTC Trainer Morgan Harris

Another form of paid media is radio. Pandora and Spotify are great platforms to advertise, in addition to local radio stations.

Music streaming services like Spotify are an effective way to reach a younger demographic of voters. 65% of people receiving ads on Spotify are 18-34. Furthermore, advertising on local radio stations is a great way to connect with viewers of all ages listening to local news or music.

Optimizing search engine results the week before an election can strategically boost awareness for a candidate. In the week leading up to Election Day, Google sees huge surges in election-related traffic. These searches are not just people looking up their polling location. Often, they’re searching for who is on the ballot, even when in line to cast their vote.

This last minute research is why running search ads can be effective, particularly in down-ballot races. Helping voters actively searching for ballot information could swing an election in your favor.

There are a wide variety of paid media opportunities to expand your reach. But a campaign must find donors to fund these efforts. It is, therefore, essential to have metrics to show digitally savvy donors the projected value of your paid advertising.

Paid Media is Not The Only Option

There are many ways to reach voters, from relational organizing to hosting community events. The success of each method is dependent on the race and size of your campaign.

“Depending on the size and scale of your voter universe, there might be even more effective ways to connect with voters. Do what’s best for your individual campaign and community.” — NDTC Marketing Director Laura Petrolino

Get Started With Paid Media Today!

Reaching Voters Through Your Communications Plan