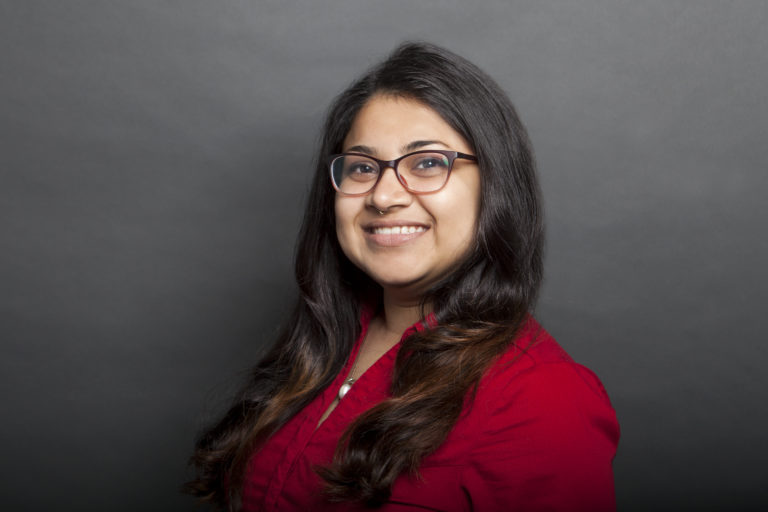 Sam is a bold leader for the Democratic party. They consistently fight for their beliefs, while holding Democrats in office accountable.

They started in progressive politics by organizing around issues such as reproductive rights and mental health. Through this work, Sam gained pivotal writing skills in the nonprofit sector, which was exactly what Staff Academy was looking for in a prospective trainee.

We caught up with Sam to talk about their journey to NDTC’s Staff Academy.

What brought you to NDTC’s Staff Academy? Why did you want to pursue a career in Democratic politics?

Samreena Farooqui: I wanted to work for Democratic campaigns, because I had been politics-adjacent for years. And, I was aware of the growing problem [of lack of representation] in local and state offices.

These officials rarely represent their constituents faithfully. Other factors such as nationwide gerrymandering, gutting of the Voting Rights Act, and consistent low turnout during midterms takes a toll as well. And, this toll was always visible for those of us who routinely [had to] appeal local and state governments.

With the 2016 Presidential Election, I think we utterly lost the ability to continue to avoid looking at this crisis in its face. So, I decided to stop being adjacent and actually get into it.

What career field were you in prior to Staff Academy? What education, experiences, skills, and training did you enter the program with?

Samreena Farooqui: Before Staff Academy, I worked with grassroots issues in community organizing.

This means working with nonprofits and local affinity groups. In terms of digital experience, I possessed basic knowledge of managing social media accounts and drafting emails.

As an organizer who worked primarily with student groups nationwide, I learned about messaging, reaching people, and developing community.

What obstacles did you face in pursuing a career in politics prior to Staff Academy?

Samreena Farooqui: The political industry is siloed. It’s one of the largest barriers to entry.

Even if you manage to find a way in, the rest of the path is pretty opaque. Usually, you could get around this by having examples of people in politics, [which is] some form of guidance.

It’s Who You Know

But, what do you do if, like most people, you don’t know anyone who actually works in politics? And even then, a lot of campaign roles are only ever posted in places with limited reach.

Most campaigns are pretty small. Because of this, the nets they cast are not very wide. You can’t Google “political campaign jobs” and find them. Not to mention, a lot of the entry points are volunteer work that you can’t necessarily provide, depending on where you are in life.

Let’s say you do manage to find yourself in a position where you were able to find a campaign role. This role pays your worth and you successfully apply to it. What are the considerations around starting and continuing in the role?

There isn’t a manual, and campaigns can also be very different from each other.

For me, having the kind of guidance Staff Academy provided was extremely helpful in figuring all of this out.

How has your career progressed after graduating from Staff Academy? What have you done since then?

Samreena Farooqui: A couple of months after Staff Academy, I started as a Production Associate at a digital firm called Rising Tide Interactive. I work on email programs on behalf of campaigns and organizations like Beshear for Kentucky, Amy for America, and the Democratic Party of Virginia. I was promoted to Production Manager in April of 2020.

The Skills You Need To Win

How did Staff Academy prepare you for advancing your career?

Samreena Farooqui: Staff Academy took everyone in the digital track through the various parts of the work you’ll usually find a campaign performing. This develops in its trainees a well-rounded base of knowledge around digital practices. So, I have a better than rudimentary idea of how all the other parts of the firm I work for operate.

Having worked for non-profits in the past, I know basic digital practices. But, having intentional and knowledgeable instruction around all the different parts put me on another level within the industry.

On top of the skills I gained during Staff Academy, it’s an asset to have this network. I know as I progress, I have a whole group of people who want to see me succeed. I’m not going into anything alone.

Belong to a Community

What would you say is the best part of Staff Academy?

Samreena Farooqui: Staff Academy introduces you to a whole new community of people.

Having a community of people in the industry through Staff Academy is incredibly helpful, practically speaking. But, it also makes the whole process approachable and more welcoming.

As a former grassroots organizer, I have a soft spot for any effort that involves community building. On a personal level, I love meeting new people, especially new people with whom I share common values.

Do you have advice for those who want to apply, but might be hesitant?

Samreena Farooqui: You don’t need to have any experience in the track you choose. Staff Academy will train you up from the fundamentals.

If your concern is that you won’t be ready for the program, don’t be. You’re ready.

In addition to the instruction and guidance you receive during the program, you’ll continue to have this resource and community. Staff Academy helps you develop skills through a particular forward-thinking perspective.

They center the program around actual experiences working on a campaign rather than sticking to purely technical hard skills. There are parts of the training you’d be very unlikely to get elsewhere.

In 2018 and 2020, campaign staffers from across the country changed this nation for the better. But, our work isn’t done.

We still have plenty to do to elect Democratic candidates up and down the ballot in 2022 and beyond.

Be a part of the next generation of progressive campaign leaders. Apply for NDTC’s Staff Academy to gain the skills you’ll need to lead campaigns across America.