How to Switch from the Persuasion Phase to GOTV - NDTC

How to Switch from the Persuasion Phase to GOTV 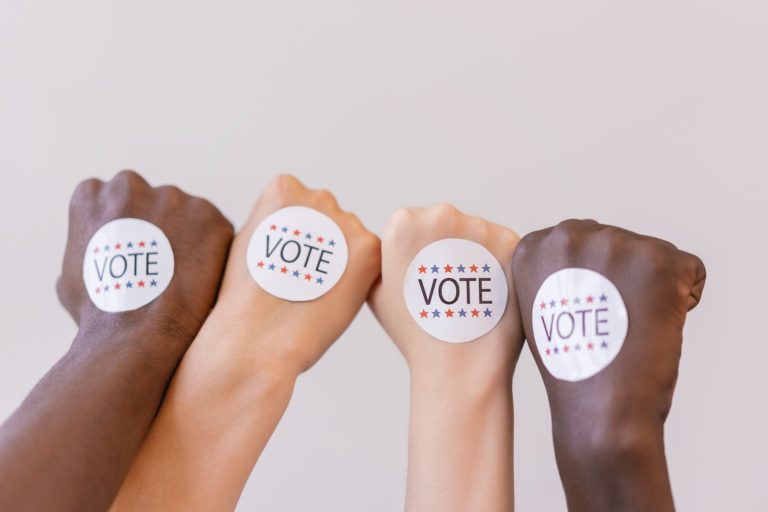 Sometimes it’s easy to get hyped up about the show of support around you and forget that support alone doesn’t win: votes do.

And this is why getting out the vote (GOTV) is so important.

The GOTV, or mobilization, phase is the final stage of a campaign’s Field operation. It starts at the end of the persuasion phase when constituents have been convinced to support your campaign. In GOTV you turn your focus to getting those voters to the polls.

Here’s how a campaign moves from persuading supporters to vote for a candidate to running a full-scale GOTV operation.

Let’s begin by distinguishing the two main phases of a Field campaign: persuasion and GOTV.

The persuasion phase is the first stage of a Field operation. It focuses on convincing voters your candidate is the best choice by demonstrating their merits to the community. The Field team makes personal contact with voters through canvassing, phone banking, and texting in order to have conversations about the candidate and impart information about voting.

For most campaigns, the persuasion phase ends approximately two weeks before Election Day, although this can vary depending on early voting options. But the process of shifting into GOTV should begin earlier. At NDTC, we use the 8-4-2 framework. 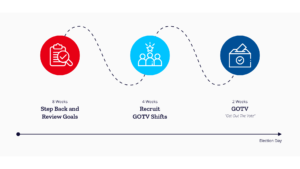 Eight weeks before Election Day begin planning. Make sure to create a GOTV universe. Assess your campaign’s progress in reaching your vote goal, and craft a GOTV plan.

Four weeks from Election Day, start recruiting volunteers for GOTV. The amount of volunteers needed will increase as Election Day nears. Campaigns should float needs with volunteers early to give them ample time to lock-in schedules and request time off if necessary. Use this spreadsheet to determine how many volunteer hours your campaign needs.

This planning makes it easier to switch from persuasion to GOTV approximately two weeks from Election Day. Execute two “dry runs” if possible, which is when the campaign does a trial run of its GOTV plan, begins contacting supporters, and works out issues in preparation for the last weekend.

Finally, the campaign must prepare for changes in its fundraising strategy. The final two weeks are the most hectic time of the campaign, so there won’t be as many resources to dedicate to fundraising. However, if the candidate makes an effort to block time for calls and sticks to that schedule, they will be in a good position for a strong fundraising finish.

Learn more about shifting into GOTV with NDTC’s course, “GOTV.”

Shifting into GOTV with Data

Depending on the nature of the campaign, there are many tactics to choose from to turn out as many voters as possible. Ideally, your GOTV strategy will be data driven. Because campaigns have limited time, money, and people, robust data collection and analysis is vital for distributing resources and maximizing voter turnout.

VoteBuilder is the primary tool used by Democratic campaigns to manage data collection and analysis. This software allows a campaign to view registered voters’ contact information, voting history, and party affiliation. As the campaign transitions into GOTV, this information is invaluable to understand which voters are most likely to turn out. That determines which voters are worth expending last-minute resources on to contact.

Navigating VoteBuilder can initially be overwhelming. Take NDTC’s course, “VoteBuilder 101,” to learn how to make this powerful tool work for your campaign.

Understanding GOTV with the Analyst Institute

VoteBuilder can be an excellent tool for identifying supporters. But it is just the tip of the iceberg when it comes to Field tactics. There is no shortage of research being done to understand how best to improve and implement effective campaign strategies. One organization doing significant work in this area is the Analyst Institute (AI).

Founded in 2006, the AI engages political operatives throughout the progressive political sphere. The group works with hundreds of partner organizations to study political campaign strategies. They compile this research into resources progressive campaigns can use.

For example, AI recently updated their GOTV Recommendations Report, which includes a deep dive into best practices for reaching and mobilizing voters. The report answers numerous questions any campaign faces when heading into GOTV: When is the best time to contact supporters? What are the talking points that should be emphasized? Which methods of contact are most effective and for whom?

The research in this field is exciting and ongoing, and the Analyst Institute provides cutting edge knowledge that could potentially make or break a campaign.

In order to learn more about the Analyst Institute and how to gain access to their extensive collection of resources, check out their website.

Your campaign has worked for months to gain voters’ support. Now, it’s time to make that support count at the polls. This is only possible with a strong GOTV operation.

Learn how to plan the final stages of your Field campaign with NDTC’s Virtual Live Training, “Home Stretch Success: GOTV Q&A for 2021 Campaigns.” The training will take place on Saturday, September 18, 2021 at 5pm EDT, as part of NDTC’s first ever Build Blue Week. Our trainers will answer your questions surrounding this crucial voter mobilization phase of your campaign.

Register for the Training