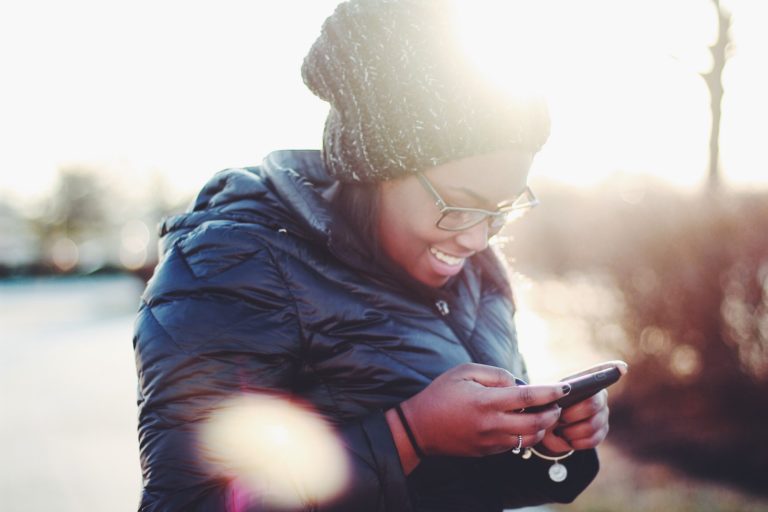 People use their phones constantly each and every day, and always have them in their hand or nearby. You may even be using your phone to read this article. The power of texting is clear, as research shows 90% of people read a text within the first three minutes of receiving one.

Texting became a powerful tool for candidates in the 2020 election, as campaigns looked for ways to connect with voters without meeting them in person.  And while upcoming election cycles might include more face-to-face outreach, the positive results from campaign text campaigns means texting won’t be going away anytime soon. It can boost messages, reach constituents directly, and mobilize action such as getting voters to the polls.

Deciding Whether to Use Texting

Depending on the size of your campaign, district, or race, a texting program may or may not be the best use of time and money.

If you’re trying to reach less than 200 people total, only have one full-time campaign staff, or if you’re not phone banking, a texting program is likely not worth the cost.

There can always be exceptions to this rule. But it’s important to evaluate how to best use limited resources and finances in a campaign.

If you are trying to reach over 200 people, have more than one staff member, and you’re already phonebanking, texting might be the right tool for your campaign. 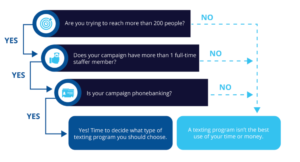 Check out NDTC’s mini-lesson, “Does Your Campaign Need a Texting Program?” for more help making the decision whether or not to start a texting program.

After you’ve decided to start a texting campaign, the next step is determining how to use that program.

In campaign texting, there are two types of programs: Broadcast (or Mass) Texting and Peer-to-Peer Texting.

In broadcast texting programs, a campaign builds a list by asking folks to opt-in to receive messages. This can be done via website forms, fundraising emails, or other digital outlets the campaign is already using.

For broadcast texting, federal law dictates constituents must give express permission to receive texts. Mass texts are sent from a five or six digit phone number. Because of this “opt-in” requirement, mass texting typically reaches existing supporters and voters.

Similar to phone banking, peer-to-peer texts are usually sent from an individual campaign volunteer to another person. The message itself will come from a normal 10-digit phone number. Unlike mass texting, the person on the receiving end does not have to legally opt-in to these types of messages.

Many campaigns use both peer-to-peer and broadcast texting campaigns in order to achieve their goals, from fundraising asks to event reminders. If your campaign has the budget, supporters, and a stellar volunteer team, you should try to use both techniques.

But if you can’t, don’t fret. Evaluate both types of texting campaigns so you can prioritize the unique needs of your campaign, district, and budget.

Peer-to-peer texting is useful in forming personal connections, as well as cheaper to use overall. However, since it requires several volunteers to run effectively, it might not be the best use of time for a small team.

Mass texting programs only need one or two dedicated volunteers to run, and it’s easier to schedule, automate, and collect data. But mass texting programs require the purchase of a message service plan and must be used for three to six months to be impactful.

Take NDTC’s course, “Texting For Campaigns,” to learn about aligning texting programs with your campaign’s goals.

Regardless of what type of program a campaign chooses, there are basic tips to make sure texts move people to act.

People check their phones often, which can be a blessing and a curse for a campaign. You don’t want to overwhelm potential voters, but you also want to make sure they receive key information about the campaign, events, and how to vote.

Frequency naturally increases during busier periods like GOTV. But until that point, send roughly two to six texts per month.

The most critical aspect of a text campaign is the message itself. Like any written campaign communication, you want the tone and voice to match the core message of the campaign. Texting is versatile, so there are a number of ways to motivate supporters, recruit new volunteers, or even fundraise.

A conversational tone works best when interacting with potential supporters. Keep your message too formal or impersonal and people might think your texts are spam. You also want them to trust your message so they are more likely to pay attention and mobilize. Unlike other platforms, it’s acceptable to use some shortened and informal language, like “Tues,” “Dems,” or other shorthand.

An effective texting program can be the key to mobilizing voters and connecting directly with constituents. Start one today with NDTC’s course, “Texting For Campaigns.” Learn when to use texting to deliver content to targeted audiences, as well as how to set up and run a campaign texting program.