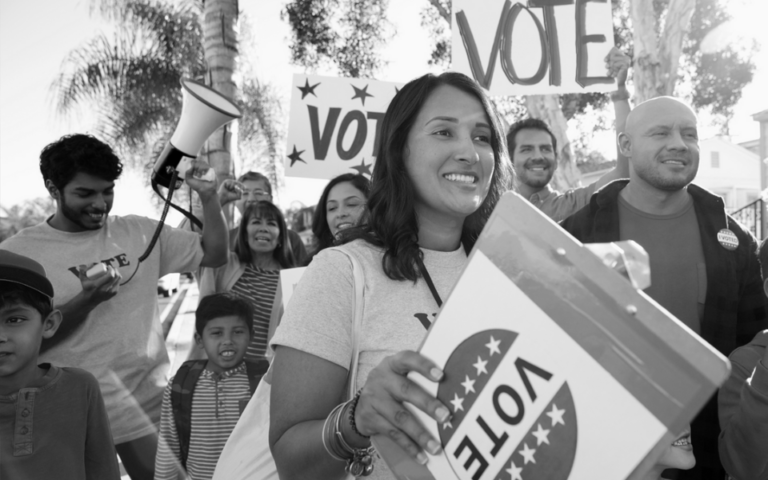 Vote tripling is a relational mobilization tactic to increase voter turnout. It asks supporters to commit to talking to three friends about voting. Vote tripling has been shown to be effective for GOTV mobilization to increase turnout, especially with voters who are not highly active in elections, politics, and activist causes.

With limited resources in a campaign, vote tripling is a cost-effective way to increase turnout. Once a supporter takes the initial step of pledging three names, the campaign can move them up the ladder of engagement to increase their impact. The campaign can now make hard asks for specific actions that help the campaign.

Let’s look at how vote tripling can impact voter turnout in a campaign:

To learn more about relational organizing, check out this virtual live training.

You can add vote tripling language into your campaign through emails and direct voter contact. While campaigns typically do vote tripling to ensure people vote on Election Day, you want to encourage people to vote in advance. Ask supporters to persuade three friends to vote by mail and follow up to ensure they’ve mailed their ballots back. If in-person Early Voting is available, have people name three friends who they will make sure vote early. You can track this data and follow up with supporters about their commitment to talk to friends about voting.

In your email strategy, you want a strong call to action! Get supporters to commit to naming three people in their lives (family, friends, coworkers, connections in community groups) who they will make sure turn out to vote. This year, prioritize vote by mail if it is available in your state. Encourage folks to get and return their ballots, so vote tripling may also apply to your vote by mail ballot chase phase. Additionally, make sure folks vote by Election Day at the latest.

When spending time talking to voters, prioritize making sure they commit to voting for you and that they have made a plan to vote.

If you have the time and volunteer power, you should add a vote tripling pledge for supporters in your phone banking, text banking, or door-to-door canvassing script when we can knock doors again.

This year we’re encouraging folks to vote by mail if they can in their state. So you may need to follow up with people earlier to make sure they have requested ballots and they have mailed them back! If you need more information on running a Vote by Mail program, please visit our on-demand course.

The Importance of Tracking Data

If you’re using a spreadsheet or NGP VAN/Votebuilder, you should record your supporter’s three “vote tripling” names. You want to record these three names for effective follow-up with the supporter and to-acknowledge another layer of accountability. Your campaign is counting on them to reach these individuals to increase turnout and make a difference in their community!

If you don’t record the data, you can’t follow up.

If you’re using Votebuilder, you can add your vote tripling activist code in VAN. Campaign volunteers can collect this data throughout the campaign, and then you can review the notes with the activist code as you get ready to get out the vote (more details here with NGP VAN).

The Key with Vote Tripling is Follow-Up

Follow up with your vote tripling supporters close to Election Day to turn out those votes. You may also follow up closer to the end of vote by mail ballot completion deadlines if you have asked people to make sure three friends vote by mail.

Here is an example of a vote tripling follow up conversation with a supporter:

Acknowledge the pledge the supporter committed to this year – reminding three people to vote. Additionally, see that your campaign adds accountability hereby explicitly repeating back the names pledged to the supporter 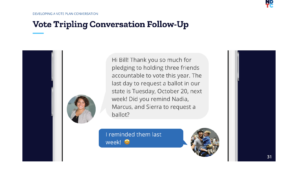 If the supporter has not gotten firm confirmations that their friends and family voted, or if the voters have additional questions, be sure to follow up. Make sure supporters know to contact their three people again and has a plan to ensure their friends vote. 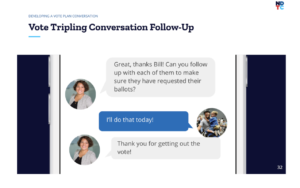 As always, thank your supporter for their commitment to getting out the vote and changing their community!

As you talk with supporters, always remember additional GOTV volunteer opportunities which would further impact the community. Remember, someone who commits to vote tripling is already saying they are ready to do more. Don’t hesitate to make another hard ask! You need more volunteers to help you reach more targeted voters. This follow up conversation is one step in further engagement!

Get Started With Vote Tripling Today!

Vote tripling is just one way to increase engagement with your campaign. It will be successful if done as part of a strong mobilization strategy that reaches as many voters as possible.

Learn more about GOTV strategy with NDTC’s course, “GOTV.” You’ll learn how to research the different voting options in your election. In addition, you’ll learn how to identify the voters your campaign will mobilize, and how to make the most of your volunteer team during GOTV. 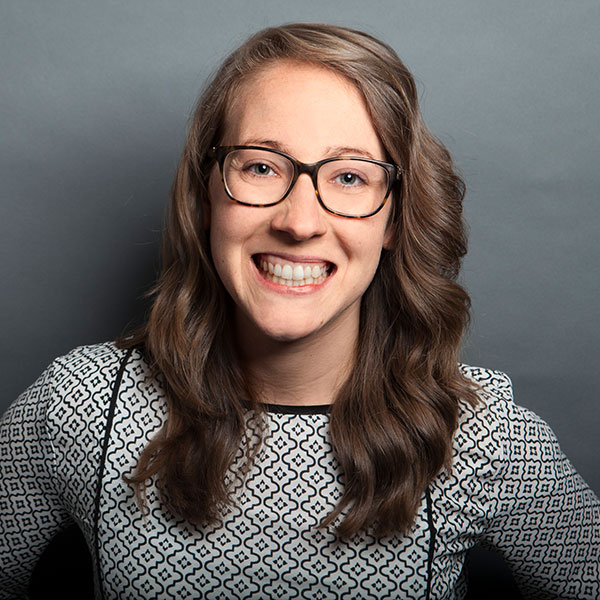 Since 2008, Collyn Warner has spent most of her time working on political and issue-based campaigns, community organizing, and training. She started her work in these areas in red (and primarily rural) areas in the regional South. In addition to these efforts, Collyn previously worked on event coordination, communication efforts, and logistics at the International Monetary Fund, as well as membership development with Business Forward. She has worked in communications and outreach for the Campaign for Southern Equality, Neighbors for Equality (a grassroots LGBTQ rights group), Amnesty International, and higher education institutions.

Collyn completed her M.A. in English (Composition and Rhetoric) at The University of Alabama, where she was awarded funding to research the digital tools of community organizing across LGBTQ advocacy efforts in North Carolina, and she has presented on activist literacy, digital organizing, and grassroots initiatives at national conferences.