She Lost her Race, but Still Scored a Big Win

Catie Robinson knew she was entering into a race that would be hard fought. As a Democrat in one of the most conservative congressional districts in the country, she had her work cut out for her.

Pre-2016, Catie Robinson was interested in politics and actively engaged in community service. She never thought she would run. While she had a Master’s degree in Government and felt qualified, she didn’t feel like it was the path for her.

After the 2016 election, she took her two daughters to the Women’s March and was astounded to see over 200 other people there. After that, she began attending local events and joined her local Indivisible chapter. There she met other local Democrats that had always been there, but who each thought they were the only one.

Despite this community, she was frustrated with the lack of opportunity for local Democrats. There wasn’t even the choice to vote for a Democrat in many of the local offices.

She decided to run for Wichita County Commissioner, unopposed in the primary. Quickly, she gained the support of the Democrats she had met through her activism. With the help of NDTC’s inaugural training course she learned to run for office.

“At first, I was a little intimidated because of the electorate here but then all throughout my campaign, Democrats AND Republicans kept coming up to me and saying that they were so glad I was running. People on both sides of the aisle were glad to see a new face, and I really hope it will help others step up and run on the Democratic ticket.”

Childcare on the Campaign Trail

After the primary, the work of campaigning began to take up more and more of her time.  In order to afford daycare for her young children, she got a job at the local Starbucks.

“We just couldn’t afford to pay for daycare on my husband’s salary alone, and I needed a job that would be somewhat flexible but allow me to bring in some extra cash. It never occurred to me to quit the race.”

Soon after, her supporters expressed interest in donating to pay for childcare directly. The Texas Election Code had no specifics regarding using campaign donations to pay for childcare. So, an attorney working for the Texas Ethics Commission suggested that she write a letter requesting a special ruling.

The unanimous ruling in response to her letter was broader than Robinson had even asked for and set a precedent for state and local candidates across Texas to use political contributions to pay for childcare. Nine days after this ruling, the Federal Elections Commission followed suit. Unanimously approving the use of campaign donations to federal candidates for childcare expenses, for time spent campaigning.

Catie Robinson lost her race. But, by her running at all, she won a victory for the entire state of Texas. Her run will allow more primary caregivers, primarily women, to run for office without having to be able to afford childcare privately.

She also continued her work with the local party and was elected to be the President of the Wichita County Democratic Association. She looks forward to finding and helping other Democratic candidates run for office in Wichita County.

No Area Too Red

Catie Robinson’s bid for County Commissioner is the perfect example of why no area is too red for Democratic candidates to run in. She may have come up short on election day, but her run inspired change. Because of her, women in Texas are more empowered to run for office themselves. Also, Democratic residents of Wichita County know that they’re not alone.

This race is the perfect example of why we need Democrats to run everywhere. For every office, up and down the ballot, no matter how red the district! The lasting effect of simply having a Democrat on the ballot are numerous.

When your neighbors and community see that, no matter how red the map may be, there are seeds of blue all around you, is powerful.

Plus, you never know when your race might change the election rules of your state for the better!

Thanks, Catie, for taking a stand and improving our community and opportunities for future candidates in Texas. 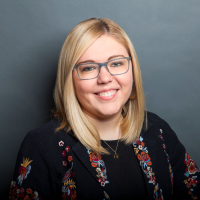 Jorian was raised in Crystal Lake, IL, but now calls Chicago her home. She graduated from UC Berkeley with a degree in political science and a minor in education reform and worked on local campaigns in the Bay Area throughout college. She has a background working for nonprofit organizations, and is currently pursuing a Master's degree in Public Policy & Public Administration with a concentration in non-profit management from Northwestern University. She currently is on the Communications team at NDTC.