Running for office is a long, grueling process. Throughout a campaign, candidates must be present in the community, speak with voters, secure endorsements, fundraise, and interact with supporters virtually. But as election season winds down, it’s time to shift toward, perhaps, the most important stage of a campaign—get out the vote (GOTV).

Your campaign has worked hard for months earning voters’ support. Now, you must ensure supporters turn out on Election Day to make their voices heard. Understanding how to effectively plan for GOTV is key in this process. 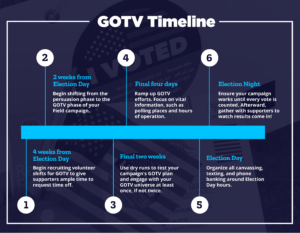 When Does GOTV Begin?

Campaigns shift into the GOTV stage of a campaign at different times. While many campaigns move into GOTV approximately two weeks before the election, others will begin their operations as early as a month before Election Day.

How do you know when it’s time to start your campaign’s GOTV efforts? It depends on two factors. The first is the advance voting laws in your state or county. Does your district have early voting, or vote by mail? If so, take advantage of these options, and encourage supporters to vote early. Knowing this information can bump up your timeline significantly. So, it’s important to know ahead of time what kind of infrastructure you’ll need to support your GOTV efforts from this point until the end of the election.

Find out everything you need to know about voting laws in your state or district here! And take our course, “Build a Vote-by-Mail Program for Your Campaign,” for more information on guiding voters through the absentee voting process.

The second factor in determining when GOTV begins is how successful your campaign has been in meeting your vote goal. If you’ve identified enough supporters to form your GOTV universe, then consider moving into GOTV. If your campaign isn’t on track to meet those goals, you may need to adjust those targets or continue the persuasion process until you get closer to Election Day.

GOTV is really a matter of backwards planning. How long is it going to take to talk to all of the voters in your GOTV universe at least three times? — Matt Burke, NDTC Instructional Designer

Getting Started With GOTV

Once your campaign moves into GOTV, mobilize supporters quickly. A campaign should aim to speak with everyone in its GOTV universe at least once, if not multiple times. This is done largely through texting, phonebanking, and canvassing. But you need a GOTV army in order to get this done efficiently and effectively.

Volunteers are essential to engage in direct voter contact. Approximately four weeks from Election Day, begin recruiting volunteers for GOTV shifts. Use this spreadsheet to determine how many volunteer hours your campaign needs.

The amount of volunteers needed will increase as Election Day nears. So, campaigns should float GOTV needs with volunteers early to give them ample time to lock-in schedules and request time off if necessary.

Learn how to maximize volunteer capacity with NDTC’s course, “Maximizing Your Volunteer Capacity.”

Dry runs ensure volunteers understand their responsibilities, and the team, as a whole, gets the chance to work together to execute the plan in this fast-paced manner. Ideally, this should take place in the last two weeks of the campaign, leading into the final weekend. Use dry runs to engage with your entire GOTV universe at least once, if not twice.

Finally, the campaign must consider how fundraising will change during GOTV. The candidate will likely have less time during this stage to host fundraising events. So the campaign will rely more on call time to finish strong. Therefore, the candidate should make an effort to block time for calls and stick to that schedule.

The Final Four Days of GOTV

The final four days before Election Day are the busiest of the entire campaign. Use this time to engage once more with your GOTV universe, and target those in your community who have yet to vote.

During the last weekend before Election Day, focus on sharing vital information with voters. This includes information like links to find polling places and hours of operation. The campaign will encourage supporters to vote early, if you can. Now is the time to take advantage of this last weekend to inform the community on how to vote on Election Day.

In the final four days, your campaign should also ramp up social media activity. Pull out all the stops. Will cat memes encourage supporters to get out and vote? If so, then post them!

It’s vital for your GOTV campaign to be as prepared for Election Day as possible. You need to get your message out. It’s Election Day, and the campaign needs its supporters to vote.

This is your last opportunity to saturate your universe and get the word out. Start early and stay out until the polls close. — Matt Burke, NDTC Instructional Designer

Organizing canvassing, phone banking, and texting around Election Day hours is standard practice. Send canvassers to the most dense areas. If you have a texting program, remind supporters it’s Election Day when they may have time to vote — in the morning, at lunch, or after the workday before polls close. Don’t forget the vital info: when to vote, where to vote, and if they need identification.

Lastly, regardless of the strategies your campaign uses to contact voters, make sure to follow all applicable laws. Use this link to check your state’s electioneering laws, and this link to learn about poll watching regulations in your area.

On Election Night, make sure your campaign works until everyone in line has voted. The campaign’s priority is to get as many supporters to the polls as possible.

Once the polls close, gather with supporters to watch the results come in. This can be done by hosting a virtual event, gathering supporters in your home, or booking a restaurant or venue.

The candidate should be prepared to speak briefly during this event. It doesn’t need to be a big, inspiring speech, but they should thank staff, volunteers, donors, and supporters for their hard work.

Regardless of your Election Night plans, be inclusive. Recognize the work of all supporters and volunteers who helped your candidacy, and give them space to celebrate with the campaign.

As election season approaches, it’s important for candidates and campaigns to prepare their GOTV operations. Get started today with NDTC’s course, “GOTV.” You’ll learn how to research advance voting options, identify your GOTV universe, and make the most of your campaign’s volunteers.